Artist trading cards (or ATCs) must be 2½ x 3½ inches in size, but otherwise when you create these miniature works of art you are limited only by your own imagination. The list of possible subjects is endless, and amongst the techniques which can be used are painting, collage, rubber stamping, needlework, beading, photography, digital image manipulation… 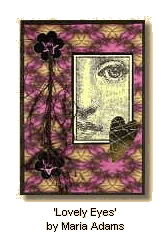 So how did artist trading cards come about?

The story so far…

Collectable trading cards have been around for over 120 years, being first produced in the 1880s by tobacco manufacturers, and later by confectionery and gum makers. Many early cards featured sports stars, but since then all manner of subjects have been covered. Collecting and trading these cards is a hobby which has been enjoyed by millions of people throughout the world.

In 1990, after admiring a collection of hockey trading cards, Swiss artist Vanci Stirnemann was inspired to produce a catalogue of his work in this format, but found that the printing costs were prohibitive. He shelved the idea, and it was not until 1996 that he decided to make the cards by hand. Thus the first artist trading cards were created. 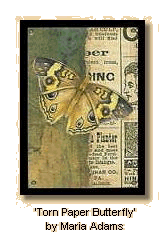 The first exhibition of 1,200 handmade cards took place in April 1997 at a bookstore and gallery in Zurich, Switzerland. Visitors were encouraged to make their own cards to trade with Stirnemann and others at the close of the exhibition. Regular trading sessions have been taking place there ever since.

Canadian artist Don Mabie (aka Chuck Stake), of Calgary, Alberta, is credited with introducing ATCs to North America after attending one of the first trading sessions in Zurich. From there the idea has spread all around the world through the medium of the internet.

Unlike other trading cards, ATCs are never bought or sold, but with their rise in popularity there has been a growing interest in similar cards made for sale. These are usually known as artist cards editions and originals, or ACEOs.

Now it's over to you…

Do you want to make artist trading cards, but you're not sure where to start? We’ll show you how, and you’ll soon be creating and trading these masterpieces in miniature.

Have you made some ATCs, and now you want to trade with other enthusiasts? If so, you'll be interested in our advice on how to swap artist trading cards.

If you've been an enthusiast for a while you've probably made and swapped dozens of these miniature works of art, but is there one that you're particularly proud of, and would like to show off? Have you tried a great new technique that you'd love to share with your fellow enthusiasts? Well, here's your chance…

Tell us about your favourite artist trading card